Weathering the Storm in Ersama Summary

About the Poet
Harsh Mander is an activist and author of several books including, Fractured Freedom: Chronicles from India’s Margins. He is the Director of the Centre for Equity Studies, a research organisation based in New Delhi. A social activist who works with survivors of mass violence and hunger, as well as homeless persons and street children. 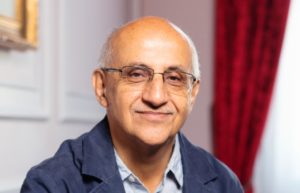 Weathering the Storm in Ersama Introduction

Weathering the Storm in Ersama by Harsh Mander is based on a true story of the adventures of a teenager Prashant was marooned on the roof of a house for two nights following the dreadful storm that hit Orissa (now Odisha) on 27th October 1999.

The storm had killed thousands of people and devastated hundreds of villages. Prashant showed extraordinary courage at the face of the great natural calamity. He saved his own life and came in the forefront to lead the disaster management in his village.

Weathering the Storm in Ersama Summary of the Lesson

On 27 October 1999, Prashant, a young boy of nineteen, went to meet his friend in Ersama, a small town in coastal Odisha. Osama was some eighteen kilometres away from his village. In the evening, weather suddenly changed and soon there occurred a strong storm with devastating winds. It was later termed as super cyclone. The wind velocity was 350 km per hour. Prashant had never witnessed such a menacing storm.

The storm was followed by heavy and incessant rain which washed away several houses and people. The angry waters swirled into his friend’s house, neck-deep. So, Prashant and his friend’s family took shelter on the rooftop where they spent two nights in the same position. They froze in the cold and continuous rain. Prashant could see in the grey light of the early morning the destruction caused by the super cyclone.

There was water everywhere in which standing some fractured cement houses in a few places. Bloated animal carcasses and human corpses floated in every direction. Even huge trees had fallen here and there. Prashant was worried about his family. But he was helpless.

Two days later, the rain stopped and the rain waters slowly began to recede. Then Prashant decided to go to his village and see his family. He took a long, sturdy stick, and then started on the difficult journey to his village through the swollen flood waters. At places the water was waist deep which slowed his journey. At several points, he lost the road and had to swim.

On the way, he came across many human bodies and carcasses of dogs, goats and cattle. But he could barely see a house standing while passing through the villages. Eventually Prashant reached his village, Kalikuda. He was depressed to see the widespread destruction everywhere.

He wanted to see his family members but found them nowhere. So, he went to the Red Cross shelter to for them. Fortunately, his family was alive. He thanked God for this.

N. Prashant was upset to see the miserable condition of the cyclone-affected people in the shelter. There was a big crowd there. They had nothing to eat except green coconuts. There was too much filth everywhere. Prashant could not be the silent spectator. He decided to do something for the survivors. First, he made arrangements for their food with the help of some youths and elders.

Then, he organised a team of youth volunteers to clean the shelter of filth, urine, vomit and floating carcasses, and to tend to the wounds and fractures of the many who had been injured.

On the fifth day, a military helicopter dropped some food parcels. But it did not return. Prashant and others devised a plan to attract the attention of the helicopter. They deputed children to lie around the shelter with empty utensils on their stomachs, to communicate to the passing helicopters that they were hungry. The plan was successful and after that the helicopter started dropping food packets and other basic needs.

Prashant’s rehabilitation work went on ceaselessly. He brought the orphaned children together and put up a polythene sheet shelter for them. He mobilised men and women to look after them with food and materials.

He also persuaded the women to start working in the food-for-work program started by an NGO, and for the children he organised sports events. Later orphans were resettled in new foster families made up of childless widows and children without adult care.

Thus, Prashant became the saviour of thousands of cyclone-affected people. His self-less service for the mankind is praiseworthy.