About the Poet Katherine Mansfield
Katherine Mansfield (1888-1923) is New Zealand’s most internationally famous author. She was a writer of short stories, poetry, letters, journals, and reviews, and changed the way the short story was written in the English language. She was a rebel and a modernist who lived her short life of 34 years to the full. Even before she died at the age of thirty-four she had achieved a reputation as one of the most talented writers of the modern short story 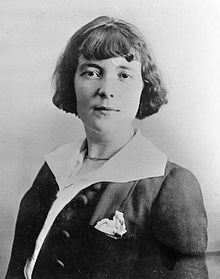 This is a short story written by Katherine Mansfield. The story is about a little girl who is initially afraid of her father and avoids him. She feels relieved on seeing her father go to the office. However, her feelings for her father change in the end from fear to understanding. She is happy to find that her father is not a figure to be feared but a person to be adored.

The Little Girl Summary of the Lesson

Kezia was a little girl who lived with her parents and grandmother. She did not like her father because of his overbearing attitude. So long father remained at his office, she was relieved.

But the moment he came home, she would start feeling uncomfortable. She never stuttered with other people but failed to speak properly in front of him. He appeared to her as harsh, rude and critical. He was like a giant for Kezia.

Mother would encourage her to go near father in the drawing-room when he came home from the office and take off his shoes like a good girl. Kezia would turn so nervous but there was no way out. She cannot disobey her mother. And when she would take off his shoes, he would ask if she had been a good girl that day.

Kezia’s grandmother wanted her to understand her parents better, and would ask her to go to the drawing-room to chat with them. But the little girl always found mother reading and father stretched out on the sofa. One day, grandmother told Kezia that father’s birthday was next week, and suggested her to make a pincushion for a gift.

Kezia stitched the three sides of the pin-cushion. Now she wanted to stuff it with some thing. She looked out for it here and there in the house. Suddenly in her mother’s bedroom she found many sheets of fine paper lying on the bed-table.

She gathered them up, tore them into tiny pieces, and stuffed her case, then sewed up the fourth side. Kezia had unknowingly committed a grave mistake. Those were important papers as they contained her father’s speech for the Port Authority.

There was a hue and cry in the house that night. Though Kezia accepted her mistake and tried to explain the reasons behind it, her father was too angry to listen to anything. He picked up a ruler and hit her hands with it. Kezia found Mr Macdonald a different sort of father.

He lived next door and used to play with his five children, laughing and enjoying, with them. This convinced Kezia that all fathers are not alike. Some are loving like Mr Macdonald and some are cruel like her own father.

One day, Kezia’s mother fell ill, and her mother and grandmother went to hospital. The little girl was left alone in the house with Alice, the cook. Kezia was all right in the daytime but when night fell, she grew suddenly afraid. What would she do if she had a nightmare? She often had nightmares and then Alice took her into her bed.

But she was not there that night. Alice tried to console her by putting her to bed. While sleeping, she had a horrible dream in the middle of the night. She woke up screaming. When she opened her eyes, she saw her father standing beside her bed. He took Kezia with her into his room and made her warm on his bed. He made her feel safe and comfortable with him.