About the Poet Vikram Seth
Vikram Seth CBE is an Indian novelist and poet.  He attended exclusive Indian schools and then graduated from Corpus Christi College, Oxford (B.A., 1975). He received a master’s degree in economics from Stanford University in the U.S. in 1978 and later studied at Nanjing University in China. 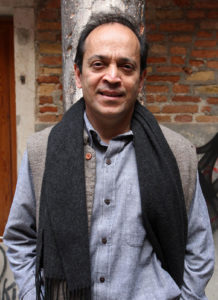 Kathmandu is an extract from Vikram Seth’s Heaven Lake. It is a travelogue which contains the description of two famous temples of Kathmandu. One is the Pashupatinath temple and the other is the Baudhnath Stupa.

The author first visits Pashupatinath temple where he finds an atmosphere of complete chaos. Only Hindus are allowed to enter the temple. Then he visits the Boudhanath Stupa, which is the Buddhist shrine.

It is in contrast to the Pashupatinath temple. There are no crowds; one can feel a sense of stillness in and around the shrine.

Kathmandu Summary of the Lesson

Kathmandu is a travelogue written by Vikram Seth. It is the description of two famous temples of Kathmandu the Pashupatinath temple and Boudhanath Stupa. The former is sacred to Hindus and the latter is sacred to Buddhists. The author first visits Pashupatinath Temple and finds there an atmosphere of utter confusion. Only Hindus are allowed to get inside the temple.

All sorts of people like priests, hawkers, devotees, tourists can be found in and around the temple. Animals like dogs, monkeys, pigeons, cows also roam through the ground. There is a huge crowd of worshippers pushing one another to make their way to the main gate of the temple.

Some Western devotees try to enter the temple but the policeman at the gate does not allow them as he is not convinced that they are the Hindus. The author finds people performing different rituals on the bank of the holy river Bagmati which flows by the side of the temple. There is a small shrine half protruding from the stone platform on the river bank.

People believe that when it emerges fully, the goddess inside will escape and with it the evil period of the Kaliyug will come to an end. Next, the author visits the Boudhanath stupa, the Buddhist shrine of Kathmandu.

It is located in the busy streets of the city but one can feel a sense of stillness there. It is in complete contrast to the Pashupatinath temple. There are no crowds, so no commotion.

The author then roams on the streets of Kathmandu and its local markets. He finds that apart from the two main shrines, there are a number of small shrines in the busy and narrow streets. The city is vivid, mercenary and religious.

There is hustle and bustle everywhere. The streets are crowded with fruit sellers, flute sellers, hawkers of postcards, shops selling Western cosmetics, film rolls and chocolate. There is so much noise because of the honking sound of cars, bells of bicycles, film songs which blare out from the radios and vendors who shout at their wares. The author gets tired and homesick and decides to return.

He goes to a Nepal Airlines office and buys a ticket for tomorrow’s flight. He then comes back to his hotel. While he is standing in the comer of the square near the hotel, he hears the melodious music produced by the flute seller and gets mesmerized.

He observes every activity of the flute seller and is impressed by his carefree life. From time to time he stands the pole on the ground, selects a flute and plays for a few minutes. He cherishes high opinion about the flute from very early.