About the Author Charles Dickens 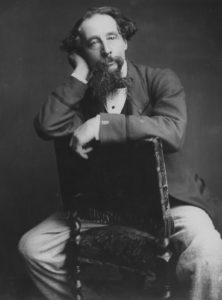 A Tale of Two Cities is a historical fiction novel by the English writer Charles Dickens. It was published in 1859. The story is based on the French Revolution and takes place over seventeen years, starting from 1775 and ending in 1792.

The story begins in 1775 with a man named Jerry Cruncher, who works for Tellson’s Bank, stopping the Dover mail-coach in order to forward an urgent message to a man named Jarvis Lorry. The message from Cruncher is to inform Mr. Lorry that a young woman will meet him at Dover. Lorry responds to Cruncher by saying, “Recalled to Life.” Mr. Lorry meets with Lucie Manette the following day as she has some news about a property that belonged to her father, whom she believes died eighteen years ago. Lorry informs Lucie that her father is alive, contrary to her belief, and was imprisoned in the Bastille in France. On the other hand, Lucie’s mother had also passed away when she was only two years old, so she grew up thinking that both of her parents were gone forever.

The story then takes us to a poor Paris neighborhood named Saint Antoine. Inside a wine shop, we get introduced to Monsieur and Madame Defarge: the owners. Lorry and Lucie are also there, Mr. Defarge takes them upstairs to a small room where Lucie’s father, Dr. Manette: a man who is barely able to speak and spends all of his time making shoes; a skill he learned while imprisoned in the Bastille. Dr. Manette doesn’t know who Lucie is, although she reminds him of his wife. Nor does he recognize Mr. Lorry, his old friend. Lucie and Lorry smuggle Dr. Manette out of Paris and takes him to England.

After this, the story skips ahead by five years into 1780. A treason trial of a man named Charles Darnay is going on: he has been accused of passing English secrets to France. A man named John Barsad testifies against Darnay, the next person to testify is a man named Roger Cly, who formerly worked as Darnay’s servant. Cly states that he had seen Mr. Darnay show papers to various French gentlemen while working for him. The last person testifies, saying that he had seen Mr. Darnay in the mail coach to Dover five years before. Mr. Stryver, Darnay’s attorney, asks the witness if he mistook someone else for Mr. Darnay, but the man is sure that it was Mr. Darnay, himself. Mr. Stryver then asks Sydney Carton, his colleague, to stand up. Everyone at the court is surprised to see how much of a resemblance the two share, and the witness’ credibility breaks down. Mr. Stryver makes the case that Barsad and Cly were the spies, and Mr. Darnay gets acquitted. Afterward, Mr. Darnay and Sydney Carton go to a tavern together. Carton despises Darnay, as he is a reminder for Carton of everything he had given up and could have been.

In France, Marquis Evrémonde, Darnay’s uncle, runs down a plebeian child with his carriage but shows no regret for it. Instead, Evrémonde curses the peasantry and continues on to his chateau, where he waits for Darnay. Darnay arrives to the chateau later on in the day and condemns the vile treatment of the peasants by his uncle’s and the French aristocrats. He renounces the name Evrémonde and informs his uncle that he is going back to England. Later on in the night, Marquis is murdered, with a note being left that only has the word “Jacques” written, the nickname used by the French revolutionaries.

A year later, in 1781, Charles Darnay asks Dr. Manette, who has returned back to his normal life, for permission to marry his daughter, Lucie. Darnay gives his word that he will disclose his real identity if Lucie accepts. At the same time, Carton also professes his love for Lucie and states that even though he doesn’t have much and that his life is pretty much worthless, Lucie has helped him dream of a better and more valuable existence. In the meantime, Jerry Cruncher, who, aside from working for Tellson’s Bank, also works as a “Resurrection-Man, sneaks into the cemetery to steal and sell Roger Cly’s body as he had recently passed away. On the other hand, John Barsad, the other spy, comes by the Defarge’s wine shop. Barsad is hoping to get evidence for the revolution, which is still in secrecy for the most part.

At the same time, a confidential registry is being knitted by Madame Defarge at the shop, the registry contains the names of all those that the revolution plans on executing. In London, on the morning of the wedding, Darnay reveals to Manette his true identity, which leads to Manette relapsing into his old habit of making shoes. After nine days, however, he regains his senses and joins Charles and Lucie on their honeymoon. After returning from their honeymoon, Sydney Carton pays Darnay a visit to ask for his friendship. Charles promises Sydney that he is always welcome to their house, regardless of everything.

The story goes forward by eight years and comes to 1789, the peasants of France have stormed the Bastille, and the French Revolution has officially begun. The peasants target the aristocrats, and in doing so, imprisons Gabelle, a man charged for maintaining the Evrémonde estate after the passing of Marquis. Gabelle writes to Darnay three years later, asking to rescue him. Despite the dangers that he could potentially face, Darnay leaves for France at once.

Up on his arrival to France, the revolutionaries arrest Darnay as he is an emigrant. Lucie and Dr. Manette head to Paris at once, hoping to save Darnay. Dr. Manette uses his influence and the fact that he served time in the Bastille as a way to free Darnay, which proves to be successful as he gets acquitted. However, he is arrested once again on the same night. The charges this time was coming from the Defarge’s. Sydney Carton immediately comes to Paris with a plan to save Darnay and gets John Barsad to help him. We learn here that John Barsad is actually Solomon Pross, the long-lost brother of Miss Pross, the loyal servant who raised and looked after Lucie growing up.

At Charles Darnay’s trial, Defarge submits an old letter that he found in Dr. Manette’s former jail cell in the Bastille. The letter states that the cause of Manette’s imprisonment, which was the fact that the Evrémonde’s (Darnay’s father and uncle) called up Manette to look after a woman whom one of the brothers had sexually assaulted, and the woman’s brother who the same brother had stabbed, killing him in the process. In fear that Dr. Manette would report their crimes, the Evrémondes had him arrested and imprisoned. After hearing the story, Darnay gets castigated by the jury for the misdoings and crimes of his family. The judge sentences Darnay to execution within twenty-four hours. Back at the wine shop, Sydney Carton finds out that Lucie and her and Darnay’s daughter are also targeted for execution by Madame Defarge as well. It is here that we learn that Madame Defarge is the surviving sibling of the man and woman the Evrémondes had killed. Upon hearing this, Carton makes arrangements for the Manettes’ immediate departure from Paris.

He then visits Charles Darnay in prison, the two exchange clothes, and Darnay gets drugged. John Barsad, who is helping Carton with the plan, carries Darnay, disguised as Carton, to a coach that is waiting for him. At the same time, Carton, who is disguised as Darnay, is waiting for his execution. As Darnay, Lucie, their daughter, and Dr. Manette leave from Paris, Madame Defarge comes to Lucie’s apartment in hopes of arresting her. Instead, she finds the very protective Miss Pross, Lucie’s caretaker, and servant, a fight ensues between the two of them, and Madame Defarge ultimately dies from the bullet of her own gun. Sydney Carton gets executed, and the narrator concludes the story by saying that Carton died with the satisfaction of knowing that his life had meaning. That he died for a cause.