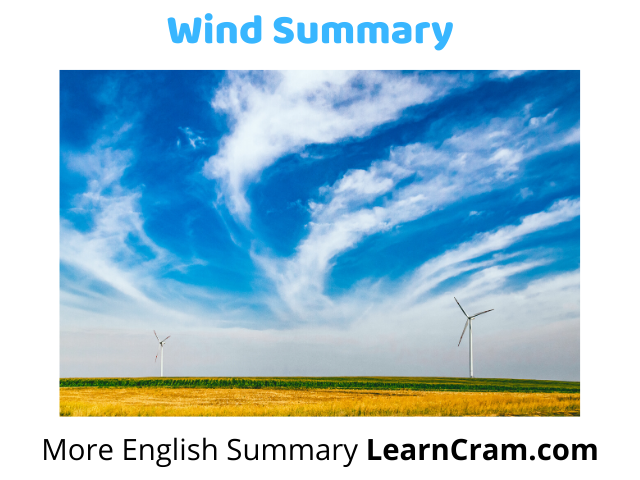 About the Poet Subramania Bharati
Chinnaswami Subramania Bharathi, also known as Bharathiyar, was a Tamil writer, poet, journalist, Indian independence activist, a social reformer and a polyglot. Popularly known as “Mahakavi Bharathi”, he was a pioneer of modern Tamil poetry. 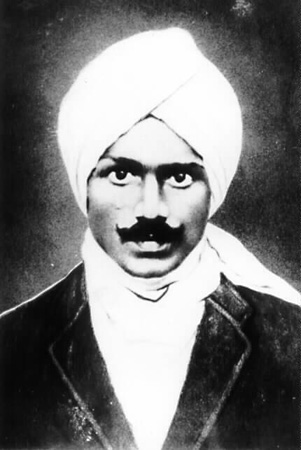 Summary of The Poem Wind By Subramania Bharati

The poem Wind by Subramania Bharati is originally in Tamil. It was translated in English by A. K. Ramanujan. The poem describes the power of the wind on nature and human life. It focuses on the violent aspect of the wind that causes heavy destruction. The poet tells us that the wind makes fun of the weak people and things, but favors the strong. He, therefore, suggests the reader be strong, both physically and mentally. The wind here is the symbol of hardships and obstacles which human beings have to face in their life. If we remain strong, we can overcome any obstacles.

Wind Summary of the Poem

The poet requests the wind to blow gently. He asks the wind not to break the shutters of the windows, scatter the papers and throw down the books from the shelf. But the wind does not listen to him and turns violent and destructive. It throws down everything and tears the pages of the books. The poet accuses the wind of bringing rain once again. He tells the wind that it always makes fun of weak people and things. It crumbles down weak houses, weak doors, and weak rafters. It tears down weak bodies and fragile hearts. But does no harm to the strong.

The poet says that it is up to the wind god whether it brings destruction or shows mercy on humanity. The poet suggests the reader that to make friends with the wind we need to build strong homes with firm doors. He also suggests people be strong, both physically and mentally to combat and resist the ill effects of the wind. The last four lines of the poem tell us about the nature of the wind.

It blows out those fires which burn with a weak force, but the strong fires turn stronger by the wind. It means that the wind is supportive of those who are already strong and powerful but crushes the weak. A very significant message is hidden in these four lines-strong people are not affected by adversities but the weak do. So, it is good to be a friend of the wind, which is a symbol of hardships and obstacles, because only then we will be able to face tough times.

FAQs on Short Summary of Wind

Q1. What is the summary of the poem’s wind?
Ans: The wind blows out the weak fires but makes the strong fires roar and flourish. Thus, the poem conveys the idea that nobody cares for the weak. Even the wind is on the side of the strong people. We must make ourselves strong to become successful and overcome the challenges in life.

Q2. Which is the best summary of the poem’s wind?
Ans: The poet describes the power of wind in this poem. The wind is compared with force in this poem. The wind can easily break window panes when it blows strongly. The books from the shelf fell down and wind tears apart the pages. It feels like wind enjoys its power and laughs at weaker things.

Q3. Who is the poet of the poem wind?
Ans: “The Wind” (Welsh: Y Gwynt) is a 64-line love poem in the form of a cywydd by the 14th-century Welsh poet Dafydd ap Gwilym. Dafydd is widely seen as the greatest of the Welsh poets, and this is one of his most highly praised works.

Q4. What does the wind god do?
Ans: The wind god breaks the shutters of the windows, scatters the papers, throws the books and tears them. The wind is also responsible for poking weaklings and crashing down houses and doors by winnowing them away.