About the Author Chinua Achebe 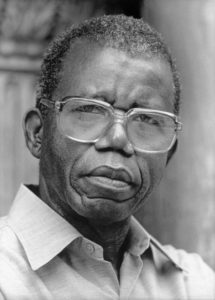 Summary Of Things Fall Apart By Chinua Achebe in English

Things Fall Apart is Chinua Achebe’s trilogy novel series named Africa is alpha of English African Literature that discloses the explicit struggle between the traditional African values and the advent of Christianity in Nigeria. The book is based on a mid-nineteenth century period in the pre-colonial African regime, highlighting the African traditions, beliefs, norms, and culture. The novel throws light on the predominant Igbo culture and takes the reader through the traditional aspects of Umuofian society.

Chinua Achebe’s Things Fall Apart is a chronicle tale about Okonkwo’s life cycle- his Umuofia’s youth, his seven-year exile at Mbanta, and his eventual return to Umuofia. Each of the three stages of Okonkwo’s life maps a gendered account of Okonkwo’s travel and living in Fatherland to Motherland and back to the Fatherland. Through Things Fall Apart, readers understand Okonkwo’s stereotypical masculinity and his role as an African warrior. However, throughout the story, Okonkwo’s obsession with his masculinity counterpart, the gendered narrative functions prevailing in that period. As the reader travels through the novel, they feel the struggle of Okonkwo’s attempts to become an exemplary and traditional Igbo masculinity, and his want to gain status among his villagers goes down in vain. His constant struggle to achieve recognition among villagers repeatedly leaves a feeling of relentless emasculation. The continuous battle for recognitions draws Okonkwo into trouble with his community, leading to the fall of the Umuofia and the nine villages, including his downfall.

Chinua Achebe’s Things Fall Apart consists of three parts. However, Okonkwo’s struggle story falls under section one of the trilogy. In this part, the reader glances through Okonkwo’s struggle to distance himself from his father, Unoka’s disreputable legacy. However, the reader discovers that Okonkwo’s local wrestling fame, his tireless efforts, and his singular will power to secure a place among the Umuofia’s titled men goes down the drain. Okonkwo’s zeal to include himself among the Tribe leads him astray, especially during the execution of Ikemefuna. Ikemefuna in the story happens to Okonkwo’s surrogate son whom he adopts after Umuofia’s capture of another village to settle a dispute. At this part of the story, the reader also undergoes Okonkwo’s desperate situation, that despite his older son Ogbuefi Ezeudu’s warning “not bear a hand in [Ikemefuna’s] death.”, Okonkwo fails in his duty as a father. Despite Ogbuefi Ezeudu’s warning, due to panic lapse, “He was afraid of being weak.” Okonkwo is driven to draw his machete upon his surrogate son. Due to his obsession with the traditional masculinity and upward mobility, Okonkwo develops quick temperament with his wives and impatience with his children’s behavior, which alienates and leave him in a precarious social outlook.

Through this part of the trilogy, besides the portrayal of Okonkwo’s a struggle for a reputed living, the author takes the reader through the journey of the pre-colonial Igbo culture. Chihua Achebe paints the reader a vivid picture of the rich culture, traditions, values, and beliefs of the Igbo world. In contrast to the happening, towards the end of the novel, Achebe shows the struggle of both Okonkwo’s life and the life of the community and culture, teetering on a brink of disaster. Okonkwo’s struggle follows him like a lost sheep- his first blow occurs with the seat of the village’s oldest man- Ogbuefi Ezeudu, the man who warned him about Ikemefuna’s killing. The second blow occurs at Ogbuefi Ezeudu’s burial ceremony, where Okonkwo misfires at Ezeudu’s sixteen-year-old son. The ominous mishap drives the remaining elder of the village to send Okonkwo and his family into exile for seven years and burn Okonkwo’s huts, and kill his livestock.

In Things Fall Apart, the author beautifully weaves the occurring’s and develops a beautiful plot with an ultimate tragedy. Okonkwo’s character is portrayed as a headstrong, proud, and a wilful character despite his struggle. After being exiled for an accidental crime, Okonkwo’s journey from fatherland to his Motherland, a retreat that deeply emasculates Okonkwo. However, these actions, roots the touch of personal feel of emasculation that parallels the of the historical and cultural changes with the arrival of the white Christian missionaries. With Christianity as their weapon, the white missionaries infiltrate the entire lower part of Nigeria, which includes both Umuofia and Mbanta, Okonkwo’s hometowns. However, the personal and historical emasculations occur when Okonkwo’s eldest son, Nwoye abandons the traditional Igbo culture and converts to the Christian belief, which ruptures Okonkwo’s patrilineal line and staunchly opposes.

The impact of the growing presence of the missionaries caused rooted internal divisions among the villagers of Umuofia. During Okonkwo’s exile in Mbanta, government officials in Umuofia began to filter, abide by the missionaries and installed a foreign rule of law. If only the villagers of lower part of Nigeria reject their colonizers at the very beginning, incidents would have been different, however, situation stated that it was too late to do anything. The drastic sudden changes in Umuofia, compromised on Okonkwo’s homecoming where he hoped to represent a fresh start. However, being put into another emasculated position, Okonkwo’s struggles drives him furious against his fellows Umuofians, for their refusal against the white missionaries and their stay in Umuofia.

Despite Umuofia’s access to medicine and education, Okonkwo sees the missionaries as a cancer who would eventually burn Umuofia of it’s rich traditional culture. Following another emasculated position, Okonkwo takes an uncompromising decision in favor of his tradition. His final act of tragedy cement the novel’s tragedy which alleviates feelings if resolution towards the colonial power among the readers. The decision of Okonkwo’s suicide, strips him of all the honor and respect, This, his suicide is an act of final emasculation, for which he is denied of a proper burial ceremony in the Igbo culture.

Through the African Literature masterpiece, Achebe portrays the collision between the European and African traditions and culture, making this classic novel a masterpiece in the postcolonial narrative. Through this narrative, Achebe shows the reader the effects of the West’s infiltration and desire to expand the way they once lived. Achebe highlights how the ruthless invasion and domination of the British missionaries, effect the native African culture. The community’s struggle parallels the protagonist Okonkwo’s struggle.