About the Author
Robert Jay Arthur Jr. (November 10, 1909 – May 2, 1969) was a writer of speculative fiction known for his work with The Mysterious Traveler radio series and for writing The Three Investigators, a series of young adult novels. Arthur was honoured twice by the Mystery Writers of America with an Edgar Award for Best Radio Drama. He also wrote scripts for television such as The Twilight Zone and Alfred Hitchcock’s TV show, Alfred Hitchcock Presents. 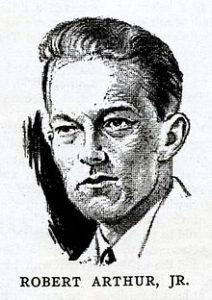 Short Summary of The Lesson Midnight Visitor in English

‘The Midnight visitor’ is a detective story written by Robert Arthur. The presence of mind is the most important quality, a secret agent must-have. Ausable, the hero of the story, is one such secret agent. He expects to get some sensitive papers in his hotel room.

Suddenly he is attacked by one of his rivals who points a pistol at him and demands the papers. Ausable shows remarkable common sense and comes out of the situation.

Fowler is surprised to see a secret agent Ausable who is too fat to be a secret agent. Ausable tells him that he was going to get an important paper for which many men have risked their lives when both of them reach Ausable’s room.

Fowler is scared to see a man standing in the room. Max, who is tall and thin man and is holding an automatic pistol in his hand, had entered his room by using a key to take the report concerning a new missile.

Ausable, sensing the danger, fabricated a story about the non-existent balcony which Max believed to be true. Ausable complained that it was due to the balcony that somebody had entered his room the second time. After some time there was knocking at the door.

Ausable again befooled Max by saying that it was the police who wanted to come inside to provide him protection. Max wanted to run away to avoid the police and jumps to his death into that non-existent balcony.

FAQs on Summary of The Story The Midnight Visitor

Question 1.
what is the Theme Of The Midnight Visitor

Answer:
The central idea of this lesson is based on Ausable intelligence that how he created a story about a non exist balcony and he knew that who is on the door but he termed to say police

Question 2.
What is the story of the midnight visitor?

Answer:
The story is about a witty secret agent named Ausable. … While they were talking, Ausable started with a story about how a guy had entered from the balcony last month below his room. While this talk was going on, a sudden knock was heard at the door.