The Handmaid’s Tale Book Summary Analysis and Explanation in English

About the Author Margaret Atwood 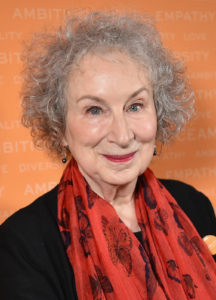 The Handmaid’s Tale Book in English

Imagine living in a word devoid of will power. Imagine living in a world where the government decides your role as a human and monitors your life. This incident is what happened to the United States, during the rule of the Republic of Gilead, to make a better place. The better world wasn’t better for everyone, especially the Handmaids. At Gilead, all women are restricted to evolve. They believed that the country could be saved if women remain submissive and naïve. The Handmaid’s Tale by Margret Atwood is a story that talks about how certain things remain futile to change. Though it was written in the 1985 dystopian scenario, the story talks about how misogyny remains despite evolution. Through the Handmaid’s Tale, Offred, narrates her struggle and longing for freedom, for a meaningful life over her unhappy job as a Handmaid. Throughout the novel, Offred struggles to find a voice in a nation where no one listens to women. Her emotions of struggle and freedom remain real and raw.

However, Offred is not even her real name but obtained the name Offred as she was placed in the Fred Waterford residence. As she moves to another household, her name would consequently change. She remains forbidden to reveal her previous name and goes by her pseudo-name. As a Handmaid, Offred is obliged to wear a red suit with a bonnet, large enough to hide her distressed face. Through Offred’s narration of the story as a Handmaid, the reader is frequently slipped into her life through her past from which the reader can construct even story leading to the beginning of the story.

The novel revolves around Offred, a Handmaid in the Republic of Gilead, and her struggle for freedom. With the upsurge of a theocratic and totalitarian state in the United States by the Republic of Gilead, freedom for women becomes conceptual. Because of climate change and exposure to toxic chemicals, a large part of the US population becomes infertile, and due to the growing danger of low reproduction rates, Handmaids are assigned to bear a child for the distraught elite couples. Handmaid is a term for sex slaves who are placed in the homes of government officials who have one purpose, namely giving birth to children. Offred is one such fertile Handmaid assigned to provide the Commander with children. If Handmaids fail at their job, they will be sent away to Colonies, at the very edge of Gilead, to clean up nuclear waste until they die of radiation poisoning. Offred, as a Handmaid, excels her performance of a task and gets mentioned as a state hero.

Once assigned the task as the Commander’s Handmaid, Offred settles with her monotonous routines- shopping trips with the Ofglen, who reveals her secret as Mayday member, her regular visits to the doctor, and her ceremonious sex with her Commander. During her journey as a Handmaid, she faces uneasiness the doctor who offers her sex as the Commander is infertile. During her period as a Handmaid, Offred bonds with her Commamder, who begins regular secret visits to the Commander to play Scramble, read the Vogue magazine makes the ceremony more impersonal.

In a situation where Handmaids should lie, Offred, at a point, is tempted when Nick, the Commander’s doctor offers her sex. This followed by the incident where the mistress asks her To sleep with Nick to bear her a child in return for her daughter’s whereabouts, Offred is left hapless and her consent remains ignored. However, her meetings with Nick turns out as an affair. And a day comes where Ofglen commits suicide for her part as a secret Mayday member.

Suddenly, a day arrives when Serena, her Mistress, finds out Offred’s visits to Jezebel and waits in her room for punishment. However, to her rescue, Nick comes in a black Eyes van and offers Offred freedom from the captives of Gilead. But Offred’s freedom remains unknown. Is she alive? Does the Gilead capture her? All remains a mystery to the readers. Throughout the story, the bleak glimpses of Offred past and her longing to meet her husband and daughter tell the readers about the extent she chooses to go and even crosses a life at Jezebels over the colonies.
Through the story, Atwood tells us the cruelty in which women were captivated. The death of the previous Ofglen tells the readers the blinding fear instilled in every woman to do something for herself. Atwood describes the brutal training every Handmaid undergoes, which includes being forced to watch horrifying moves, shaming other women, and being beaten. The line, ‘A rat in a maze, is free to go anywhere, as long as it stays inside the maze. (p. 165).’ states Offred’s plight and her struggle for freedom intertwined with the difficulties she faces to communicate with the Mayday resistance.

The ending of the Handmaid’s Tale is a 2196 epilogue narrated by Dr. Piexoto. The readers, however, are left with fear for Offred, which remains unmentioned. Offred’s end tells the reader about her passivity, gripped by fear to stand against the atrocities of the Gilead regime. Through the epilogue, De. Piezo to, explains Offred’s experience and throwing a light on the Gilead’s government. Yet it is Offred’s voice, her bleak memories, her struggles, and her pain, that remain with us till the end, and not Dr. piexoto’s academic addressing.

Although The Handmaid’s Tale is a fiction set in the late nineteenth century, women today undergo misogynistic inequality, which makes the book more resonant to the present-day readers. Through Handmaid’s Tale, Atwood hisses about our conditioned lives, adapting to rules. The rules that none are complying but only accepted as a way of life itself. What happened at Gilead is a warning about our bleak future life. The rising pollution, waste, and intolerance to nature that humanity has posed are dredging for capitalistic purposes. However, the Governments like Gilead at a first glimpse look pleasing to the environment and soulful to Earth but are not wise for Humankind to dwell.