The Crucible By Arthur Miller Summary Analysis and Explanation in English

About the Author Arthur Miller 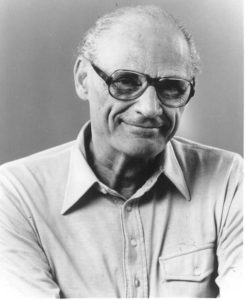 Short Summary Of The Crucible By Arthur Miller in English

The Crucible By Arthur Miller Summary Introduction
Arthur Miller’s ‘The Crucible’ is a play based on the Salem Witch Trials that took place between 1692 and 1693 in Salem, Massachusetts. It was published in 1953.

The play begins with Reverend Parris finding his daughter, Betty, dancing in the woods with a couple of other girls and his slave, Tituba, they were all performing a pagan ritual. Betty becomes comatose. After the news spread, a crowd convenes outside Parris’ house; he becomes worried that this event will get him removed from the position of town preacher. As he calls for Reverend Hale, an expert on Witchcraft, he questions Abigail, his niece, and one of the girls who was with Betty, about what they were doing. She’s quick to tell him that they were merely dancing and tells the other girls involved to also say the same thing to anyone who asks, threatening dire consequences if any of them tell the truth.

A little while later, John Proctor, a farmer enters the house and talks to Abigail in private, here, we find out that John and Abigail had an affair a year prior while she was working as a maid at his house: which leads to Elizabeth, John’s wife to fire her. Abigail tells John that she still has feelings for him, and he responds by telling her to stop fooling around with the girls.

Betty wakes up from comatose state and begins to scream, attracting the attention of everyone gathered at the house. As Proctor leaves, Reverend Hale arrives to check up on Betty; he questions Abigail about their activities in the woods. Becoming suspicious with her answers, he speaks to Tituba, along with Reverend Parris. Tituba is quick to tell the truth, saying that they were all trying to communicate with the devil, and she begins to blame various people from the town of trying to communicate with the devil as well. Abigail joins Tituba, claiming that she has seen various townsfolk interacting with the devil, Betty joins in as well, naming witches, leading to everyone at the house going into a frenzy.

Sometime later at their farmhouse, John and Elizabeth Proctor are discussing the trials and the number of people that have been wrongfully arrested because of it. This is when Elizabeth urges John to go to court and declare Elizabeth a fraud, John refuses, which leads Elizabeth to believe that John still has feelings for Abigail as well. After a while, the Proctor’s maid, Mary Warren comes from Salem to them, as a member of Abigail’s circle, she informs the couple that Elizabeth has been accused of Witchcraft. As Mary leaves to go to bed, Reverend Hale comes to the farmhouse to discuss matters with the couple. Not long after, Giles Corey and Francis Nurse also come to the Proctor household to proclaim that both of their wives have been arrested. A couple of officers follow after Giles and Francis to apprehend Elizabeth and take her to court. John quickly calls for Mary, urging her to go back to Salem to denounce Abigail as well as the other girls as frauds.

The following day, Proctor and Mary go to court and tell Judge Danforth that Mary will testify that the girls are lying, it is here that Danforth informs Proctor that Elizabeth is pregnant and will be spared for some time. But Proctor insists that Mary will testify about the Abigail and the other girls being frauds. Danforth agrees, and Mary announces to the court that the girls are lying. Once the girls are brought in after this, they proclaim that Mary is trying to bewitch them, infuriating Proctor, who tells the court that he had an affair with Abigail and that she is trying to get Elizabeth arrested out of sheer jealousy. Judge Danforth then calls for Elizabeth and questions her about whether or not John has been unfaithful to her. She lies to protect John’s reputation and integrity, but Danforth accuses John of being a liar. Abigail and girls continued to pretend like they are being bewitched by Mary, which leads to her breaking down and accusing John of being a witch. He loses his temper and goes into a rage, leading to him getting arrested and Reverend Hale quitting the proceedings.

Seasons pass by, and the witch trials have left an uneasy feeling in Salem and its neighboring towns. Judge Danforth has gotten nervous, Abigail has run away with all of Parris’ money, and Reverend Hale begs the accused witches to lie to save themselves, but they refuse. Danforth comes up with an idea to save John: confession. He tells Elizabeth to speak to John about confessing to the court, and he agrees. Even though John agrees, he refuses to accuse anyone else. He tears up the statement made by the court as he gets angry about the court’s insistence that the statement is made public, he retracts his admission of guilt as well. Despite Hale’s pleas, Proctor is hanged, along with the others, putting an end to the trials.