About the Poet R.K. Laxman
Rasipuram Krishnaswamy Laxman (1921-2015). He began cartooning for the Free Press Journal, a newspaper in Bombay. He is best known for his creation The Common Man and for his daily cartoon strip, You Said It in The Times of India, which started in 1951. 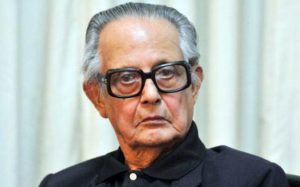 Iswaran the Storyteller by R. K. Narayan is a story about Mahendra, a junior supervisor in a firm and his cook, Iswaran. Mahendra has to keep moving from place to place every now and then as ordered by his head office.

Wherever he goes, Iswaran will always be there with him. He not only takes great care of his master but also tells him interesting stories. One day he scares his master with his ghost story.

Iswaran the Storyteller Summary of the Lesson

Mahendra was a junior supervisor in a firm which offered on hire supervisors at various types of construction sites. His job made him move every now and then from a coal mining area to a railway bridge construction site to some chemical plant after some months.

He was a bachelor. He had a cook named Iswaran. Iswaran accompanied Mahendra wherever he went and was therefore greatly attached to him. He not only cooked for Mahendra, and washed his clothes but also used to tell him stories in a very interesting manner.

Iswaran loved to read popular Tamil thrillers in his leisure time. As a result, he innovated his own thrillers and would tell about it to Mahendra. Mahendra enjoyed listening to them because of the inimitable way in which they were told. Once he told his master a story about how he controlled a wild elephant that had gone berserk.

He told that he came from a place famous for timber. The logs there were carried on to the lorries by elephants. They were huge well-fed beats. But when they turned wild, not even the most experienced mahout could control them. One day the elephant entered the school ground where children were playing, breaking through the brick wall. Children and teachers got terrified and rushed to the safe place.

But Iswaran was not scared. He moved towards the mad tusker with a cane in his hand and whacked its third toenail on the quick. The beast shivered from head to foot and then collapsed.

One day, while talking about the spirits of ancestors, he began to talk of ghosts. He said that the place where they were staying was once a burial ground and that he had sometimes seen ghosts at night. Being a brave man, he was not scared of them.

Then he told his master about a horrible ghost woman seen only on a full moon night. She moaned and carried a foetus in her arms. Mahendra shivered at the description and told Iswaran that there were no such things as ghosts or spirits. He left the room and retired for the night. But he could not sleep. The story of the ghost woman began to hover in his mind.

One night, Mahendra was woken up from his sleep by a low moan close to his window. He looked out at the white sheet of moonlight outside, and found a dark cloudy form clutching a bundle. Mahendra was sure that it was none but the ghost woman.

He broke into a cold sweat and fell back on the pillow, panting. In the morning Iswaran asked him about the ghost woman and the sound of moaning that was coming from his room. But Mahendra was very upset. He decided to leave the place immediately.