Evelyn Glennie Listens to sound without Hearing it Summary

About the Poet Ustaad Evelyn Glennie
Evelyn Glennie is the world’s premiere solo percussionist with over 30 years of experience in the industry. She is a multi-percussionist, who can play thousands of instruments to perfection, a most sought after musician internationally. Surprisingly, she achieved this status in spite of her disability, she was profoundly deaf. But she learned to listen with her body instead of the ears. 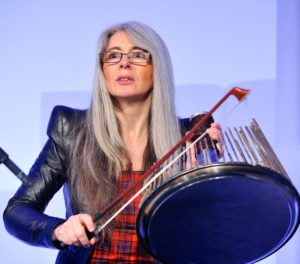 Evelyn Glennie Listens to sound without Hearing it Introduction

The lesson has been divided into two parts. Both are associated with the subject of music and the personalities who made music their life. Evelyn Glennie turned out to be the most sought after musician internationally in spite of her disability.

She was profoundly deaf but learned to listen to music with her body instead of the ears. She became the perfect player of the xylophone and earned a huge name and fame. Bismillah Khan, on the other hand, became India’s most revered shehnai maestro.

He was the winner of Bharat Ratna, the highest civilian award of India. He performed not only in India but abroad too.

Evelyn Glennie is a multi-percussionist, who can play thousands of instruments to perfection. She is the most sought after musician of the world. She reached the pinnacle in spite of being profoundly deaf. But she excelled in the field of music by dint of her hard work and firm determination.

Evelyn’s loss of hearing had been gradual. It was first noticed by her mother when she was just eight-years-old, waiting to play the piano. By the time she was eleven, it was discovered that her hearing was severely impaired as a result of gradual nerve damage.

It was a big shock for her and her family. But she was determined to lead a normal life and pursue her career in music. She was greatly supported by percussionist Ron Forbes who spotted her potential and decided to work with her. He began by turning two large drums to different notes and advised Evelyn to not listen with her ears but try to sense it some other way.

Soon, she discovered that she could sense certain notes in different parts of her body. She also learned to open her mind and body to sounds and vibrations. After that she never looked back. She decided to make music her life. She joined the

prestigious Royal Academy of Music and got excellent marks. She gradually moved from orchestral work to solo performances. She proved her excellence in this field too.

Evelyn Glennie believed in hard work. It was her hard work combined with firm determination which made her the world’s most sought-after multi-percussionist with a mastery of some thousand instruments.

In 1991 she was presented with the Royal Philharmonic Society’s prestigious Soloist of the Year Award. She gives free concerts in prisons and hospitals. She also takes classes for young musicians.

Thus, she is a shining inspiration for the deaf and handicapped children. She has proved that nothing is impossible. You just fix your goal and start doing hard work. You will get there.